It’s New Year’s a day later (than in Australia) here in Peru, but it was worth the wait! Let’s just say, legal fireworks are as fun as they sound 😉

This past year I was lucky enough to travel through 13 countries, and loved every one. I always have a travel wish list, but as I tick each item off the list it only grows longer. So before I think about my wish list for 2016, I wanted to look back on my favourite places and experiences.

Here’s some 2016 travel inspo for you. Hope you enjoy the list as much as I enjoyed making it!

END_OF_DOCUMENT_TOKEN_TO_BE_REPLACED

Ask most travellers who have visited, and they’ll tell you Phnom Penh is a hectic city that they remember mostly as the home of the saddening Khmer Rouge museums and memorials. I am here to tell you, this city is so much more than that. Just as all of Cambodia is developing and seeking desperately to move past its horrendous past, its capital is the hub of this forward motion. It is hectic, and chaotic, and messy, but I love it here, and I’ll tell you why. While this ended up being mostly food places because…well, food…it’s also a compilation of all the things you can’t miss in Phnom Penh.

END_OF_DOCUMENT_TOKEN_TO_BE_REPLACED

That feel when you’re stuck at home studying or working in freezing winter and you come across a photo of idyllic summer. Can’t wait to get on the road again. ..

Riding a moto around the beautiful region of Pai in Northern Thailand is a must for anyone visiting South-East Asia. For more places to visit see my post ‘Ten must-visit places in South-East Asia’!

This list will be different for everyone, depending on where you’ve been and what type of travel you enjoy most. I think the most defining factor in your enjoyment of any place is the people you meet and the particular experiences you happen to have at the time. Here’s my list of place in South-East that I enjoyed so much, every time someone mentions them I am unable to stop myself rabbiting on about where to go and what to do. I have yet to visit places like the Philippines, Mynamar and Indonesia for example, and would never claim to have explored everything that Thailand, Vietnam, Cambodia and Laos and Malaysia have to offer. Hopefully this is some SE-Asian inspiration for you, as every one of these places has shown me a great time, and I hope it will for you!

Nestled in the gorgeous landscape of Northern Laos, Luang Prabang is the ultimate in beautiful landscapes (just look at that backdrop), amazing natural experiences (I rode an elephant into a waterfall there, nuff said), and cultural immersion (wake up at 5am to see Buddhists from near and far line up in the streets to give food donations to the monks).  It also has one of the best markets in South-East Asia. The only thing lacking in LP is nightlife, as there is a curfew, making it perfect for a visit after places like Vang Vieng or the Thai islands.

Hoi-An is a wee little town built around a river, and is one of the main stops along the coastal route of Vietnam. Despite this, it has a very laid-back vibe. The town boasts some of the best tailors in the country and is absolutely choccers with options, from shoes to clothes to bathers to bags, all at great prices. Hit those up, then hire a bike for the day (for a whopping $1) and take the leisurely ride past rice paddies and water buffalo to the amazing beaches. At night, head down to the riverfront (pictured) to watch the sunset and enjoy a great meal. When I was there the lanterns all along the river made this particularly awesome.

END_OF_DOCUMENT_TOKEN_TO_BE_REPLACED

One of the reasons I love photography is that it’s so unexpected. You’ll photograph a scene or moment that is taking your breath away and because of that, the photo just can’t do it justice. The photo is just a link for you to that memory, and inspiration for others to go experience it for themselves. At other times,  something seemingly innocuous or even ugly can be made beautiful and interesting when photographed from a different angle or perspective. I love that. In deference to my fledgling skills in, but love of, photography here are some of my favourite photos from my travels so far. 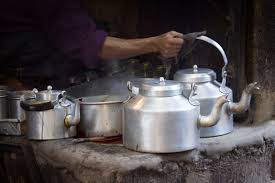 Chai Tea comes in many different forms (as I recently learnt). This recipe is one I learnt from an Indian friend while living in Phnom Penh, and its the more basic version of Chai, but still so very delicious. The other version is Masala Chai, which is the more complex spice mix more common overseas, often including spices like cinnamon, cardamom, and star anise.

On the stove, add the ginger and tea to the water and bring to the boil.

When first boiling, add the sugar, stir, and turn down the heat. Add the milk.

Strain the tea and serve. Enjoy!

As I am not strictly backpacking at the moment, due to this pesky internship at the Cambodian Centre for Human Rights, I must cram all my exploring between Friday and Sunday nights. This means if I want to really go anywhere outside of Phnom Penh, I gots to gets the night-bus. Good news though- it was terrifying! Yay! I was initially taken to a bus station where I was the only white person, where I promptly made friends with the first friendly looking dude that sat near me, partly to make friends and partly so someone could translate the Khmer being yelled by the bus company staff. Lucky I did this, as my new matey was able to spot a tuk tuk for the siem-reap-bound that I definitely would have missed. Imagine me, just sitting at creepy ass, middle of nowhere bus station, waiting for a bus that was leaving from an entirely different place. Phew.

So I was taken to the proper location in a tuk-tuk jammed with 5 other dudes. Mmm, I had missed the sweet smell of man-sweat. Not. I finally got on the right bus, and though it had leaky air-con and jammed/broken seats, at it least it had wheels and was semi-functional. I would later find out that this particular bus company is run by a super-dodge tycoon of sorts in Cambodia, and has been involved in several lethal head-on collisions in past few months. All unreported in the media of course. Good. Thank goodness Mr Hostel Man in Siem Reap could tell me all this and book me with a non-death-bus on the way home.

Once in Siem Reap I got right to business. I arrived around 4am, and at around 4.30am left in yet another tuk tuk to see the ancient temples around which the little town of Siem Reap was formed. Viewing Angkor Wat at sunrise is absolutely worth it, or it was the first time I went, so getting a good 10 mins of sleep before heading out seemed like a good idea. Even though my sunset this time was less than amazing, spending the day wandering the temples is quite the experience.

END_OF_DOCUMENT_TOKEN_TO_BE_REPLACED

I recently went to the beautiful island off the coast of Sihanoukville, Cambodia with my loverly friend lushy tushy (real name has not been used to protect her anonymity. She shall be vair famous one day, you wait.) We started on Koh Rong island, Koch Tuch village, a place that has been variously called a paradise but known to some closer to me as a place where tourism and development has continued to damage the local community and environment to a heartbreaking level. Mostly, and definitely for visitors, it’s a super duper purty island with white sand beaches and awesomely chilled bars and people. We spent one night boogying out on the island then headed over to Koh Rong Samloem, the quite island, for a night.

Our super sturdy boat over to the second island may have also had a big one the night before, as about 5 minutes into the journey the second engine sputtered out. Not the greatest feeling in the world being stuck between two islands with all your not-so-waterproof crapola. Alas, our trusty skipper managed to start it again and we were off, but not without running through the entire series of ‘Lost’ and the movie ‘The Beach’ in my head first.

I spent six weeks living on Koh Rong in 2013 with some friends of mine, but somehow never managed to make the 30 minute trip over to the less developed but equally beautiful Koh Rong Samloem. These islands are developing at a rate of something very fast…a cheetah…or a very hungry bear. Anywho, what a few years ago were relatively untouched islands are now teeming with guesthouses, dive centres and bars/restaurants.

Samloem is definitely less busy and a therefore a different vibe to the other island, but I would say the key factor contributing to that is that the village in Samloem is not actually on a beach (or at least not a proper sandy beach). When your boat arrives on Koh Tuch village Koh Rong, you are presented with a beautiful white sand beach with all your hearts desires for accommodation, food, drinks, adventuring and even massage now.  Samloem has most of these things, but you have to take a 10-15 minute walk to get to beach (pictured above in my attempt at a above/below shot).

END_OF_DOCUMENT_TOKEN_TO_BE_REPLACED

Just a small town girl who writes about Christian stuff.

The One with Wanderlust

I am in love with the world. I've nestled lovingly in it.

Experience Budapest in a way most never do

Life by Design, Not by Default

................... for lovers of ice cream. Your free on line magazine for sweet frozen treats. Recipes, inspiration, artisanal ideas for your delectation.

Thoughts of the Fallen

A collection of nonsensical words thrown together

Godspeed To A Mighty Balloon

Misadventures From Around the Globe

Travel writing and long form non-fiction narrative from the road

What an Amazing World!

Seeing, feeling and exploring places and cultures of the world